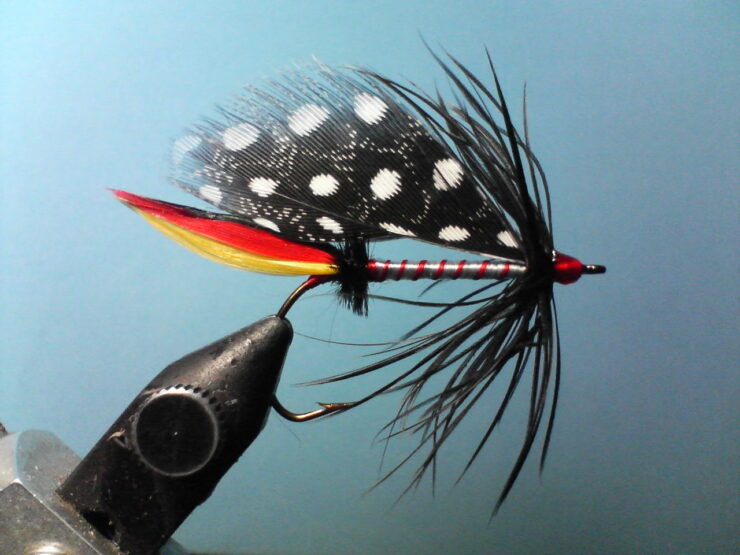 The single question most often asked by novice fly fishermen is how do I choose the right fly? Thus, if you read the plethora of literature written on this topic, you would very likely come to the conclusion that in order to become a successful fly fisherman, you will need to carry an entire collection of flies.

Flies designed to precisely imitate the aquatic insects and/or baitfish that are hatching or inhabiting the streams, ponds, or lakes, that you intend to fish.

However, while this is certainly a sound approach, carrying copies of every possible fly pattern would leave your fly vest bulging at the seams and would weigh you down like an anchor.

The Different Types of Fly Patterns

Thus, you should first be aware that all artificial fishing flies regardless of what fish species they are designed to catch can be first divided into two categories consisting of Attractors and Imitators. Then, they can further be subdivided into five more categories consisting of dry flies, wet flies, nymphs, and, streamers while terrestrials can be either dry or wet flies.

Furthermore, Attractor flies are defined as any fly pattern that consists of bright colors such as red, yellow, and/or green and which does not closely imitate any known aquatic or terrestrial streamside insect such as the famous Royal Coachman fly pattern. However, Imitator flies are just the opposite in that they are tied using materials that do closely imitate certain families and, even specific species, of aquatic or terrestrial insects such as Mayflies, Caddisflies, ants, inchworms, and beetles.

Then, to muddy the water, even more, Dry Flies are flies that have been tied using highly buoyant materials such that they float on the water’s surface while wet flies on the other hand are just the opposite in that they are specifically designed to sink beneath the water’s surface.

So, how does knowing this help you to choose the appropriate fly for any given time of year or time of day on any given stream or other body of water? Well, to start with, because fish have a relatively small brain, they learn to differentiate edible insects and baitfish from debris by observing their size, shape, color, and the minute movement of their gills and eyes.

Therefore, as a general rule, most fly fishermen use imitator flies during periods when a specific family of flies such as Mayflies or Caddis Flies is hatching, and then, they choose a fly from their selection that closely matches the hatching insects in both size and color. But, because fish have a relatively short memory, they can soon forget what these insects look like, and thus, they may or may not strike them during the periods between hatches.

Consequently, Attractor Flies are specifically designed to entice fish to strike them by incorporating certain colors such as red, yellow, and green in combinations that have been proven to trigger their feeding reflex. Thus, many experienced fly fishermen rely on attractor patterns to catch fish when there are no aquatic insects presently hatching.

On the other hand, any stream, pond, or lake that is inhabited by aquatic insects is inhabited by them all year long even though the mature adults of each species only hatch once a year for a relatively short period of time.

But, their offspring, which exist in the nymphal stage, are available to the fish all year long and thus, nymph patterns are often the single most productive fly pattern available.

In addition, wet flies are another very effective fly pattern dating all of the ways back to the Romans. However, when they were first developed, local blacksmiths lacked the ability to produce fine wire hooks made from hardened steel.

Thus, their hooks were simply too heavy to allow their flies to float on the surface. But, because they represent a larger meal than most nymphs and because they do not require a fish to come to the surface to strike them, wet flies can be very effective; especially if used to imitate fallen Mayfly Spinners after a Spinner fall.

On the other hand, although dry flies are often the least productive type of fly pattern to fish with, they are also without a doubt the single most fun fly pattern to fish with because, not only is the fly fisherman able to observe his fly as it drifts on the surface of the current, he is often able to see the fish rise through the water column to strike the fly which can be extremely exciting!

Then, bridging the gap between wet flies and dry flies, we have Terrestrials which are fly patterns that are specifically designed to imitate terrestrial insects such as ants, inchworms, crickets, grasshoppers, and beetles.

However, some terrestrial fly patterns such as ants and inchworms are designed to suspend in the surface film or to float just below the water’s surface while others such as grasshoppers, crickets, and beetles, are designed to float on the water’s surface. However, regardless of which terrestrial fly pattern you choose, they can all be very effective during the warmer months of the year.

Last, we have streamer fly patterns which are specifically designed to resemble the size and shape of both freshwater and saltwater baitfish and crustaceans. Thus, while streamer patterns are often far less productive than nymphs, wet flies, or even terrestrials, they do tend to attract much larger fish due to the food versus energy equation.

How to Choose an Appropriate Fly Selection

So, once again, how does know all of this help you to choose an appropriate fly selection for any given time of year for any given stream or other body of water? Well, the answer to that question is to first acquire separate terrestrial, dry fly, wet fly, nymph, and streamer fly boxes. Then, stock your terrestrial fly box with the aforementioned black and red ants, inchworms, earthworms, grasshoppers, crickets, and beetles.

Then, stock your dry fly box with a selection of attractor Mayfly patterns in the three known trigger colors by choosing patterns such as the Royal Wulff (red floss), the Tennessee Wulff (yellow floss), and the Carolina Wulff (green floss) or, Humpy patterns in the same colors in addition to stocking Stimulator patterns in red, yellow, and green.

That way, you will have the ability to “prospect” with your attractor flies both above and below the surface and then, if the fish seem uninterested in bright colors, then you can try some of the more subdued colors by using one of your imitator fly patterns.

In addition, if you happen to run across a hatch, then you can also “match the hatch” by simply choosing a fly from your imitator selection that closely matches the Family, size, and color of the insects that you are seeing.

Or, if you are a trophy hunter, then large terrestrials or streamers are often the best way to go because, as fish grow larger, their energy requirements increase exponentially, and thus, the larger the meal, the more energy a fish gains from catching and consuming it. Consequently, truly large fish often completely ignore all but the largest aquatic insects and instead prefer to target large terrestrial insects and indigenous baitfish.

But, regardless of whether you prefer terrestrials, dry flies, wet flies, nymphs, or streamers, by carrying a general selection of both attractor and imitator flies, you will find that you are well prepared to fish anywhere in the world on any type of water at any time of year.