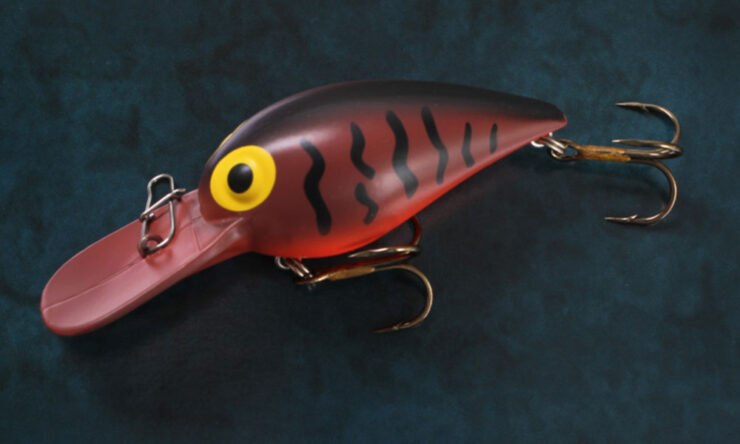 Crankbaits are very popular among bass, pike, and walleye fisherman. They work just about anywhere, in any season, and just about any condition. Crankbaits are usually fished considerably faster than a lot of other lures, allowing you to cover more water, more quickly. This is significant for tournament anglers, and others who only have a limited time to fish. Crankbaits are also very simple to use.

There are times when a crankbait will outfish anything else, even live bait. In smaller sizes, they are even great for crappie in Spring and Fall.

What Is A Crankbait?

A crankbait is a largish-bodied lure, usually in the shape of a sunfish, shad, or other deep-bodied fish, although some are thinner to represent minnows, made from plastic, or wood. There are some ultralight models available for crappie as well.

Most crankbaits have a ‘lip’, in the form of a rudimentary diving plane, that makes the lure dive rapidly, and simultaneously wiggle violently from side to side.

There are also “lipless” crankbaits that have a slightly different action but still work the same way. This creates a huge disturbance in the water that fish can feel in their lateral line for quite some distance, making them come to investigate. Oftentimes, rattles are added to enhance the effect.

Some are floater/divers, some suspend at depth, and others sink rapidly. Even the floating models can dive to 15′ or more.

How Crankbaits Came To Be: Brief History

The first crank-baits were handcrafted by James Heddon in 1898, James was a Dowagiac, Michigan beekeeper looking for a better way to catch fish with the new baitcasting reels, just becoming popular in the U.S. He whittled a frog from an old broom-handle, was unsatisfied with the finished product and threw it into the millpond, where a large bass immediately attacked it.

He experimented with different designs, and in 1902, formed the Heddon Lure Company, and sold the first commercial wooden fishing lures in the world with his Heddon Frog, and Dowagiac Expert (River Runt), both of which are still in production, although in plastic. In 1967, an angler named Fred Young whittled the familiar, “Pregnant Perch” shape from a block of balsa wood, and attached a lip, and two treble hooks to it.

It was later marketed (in plastic) by the Cotton Cordell Lure Company as the ‘Big O’, still one of the most popular crank-baits out there. Today, there are hundreds of different crankbait models to choose from, all based on the simple concepts of Mr. Heddon, and Mr. Young.

There are three types of crank-baits you can use. The floating models rest on the surface until you start reeling them in.

When pulled through the water, the lip makes them dive and wobble frantically.

You can also just pull your rod tip sideways for a few feet, then let it surface. However you do it, it’s best to let the crankbait rest on the surface for at least 15 seconds before cranking it in again.

This imitates the actions of an injured baitfish. For suspending and sinking crank-baits, it’s the same procedure, except the suspending lure will stay at the same depth, and the sinking one will climb towards the surface, then sink when you stop.

And, you can always just cast a crank-bait out, and reel it all the way in. Anyway, that legally catches fish is the right way.

While not completely weedless, both the lip and the head-down swimming action of a crankbait do a good job of clearing the way for the hooks, so they don’t get snagged as much as you might think.

Oftentimes, merely stopping the retrieve so the lure can float back up is enough to free a snag, without digging the hooks in. Crank-baits are excellent for fishing just above the bottom structure. In winter, few lures can match the productivity of a sinking crankbait.

Crank-baits work best with a slow-action rod. A slow action rod will keep you from ripping the lure out of a bass’s mouth, and also allow the lure more freedom of movement. A medium-weight rod is about right unless you are using the small models, in which case a light or ultralight rod would be great. You can control the depth by adjusting the lip (on models with an adjustable lip), or by the size line you use.

A lighter line means deeper diving. The heavier line keeps the lure from diving so deep (due to the resistance of the line through the water….it’s complicated. Just take my word for it, or try it yourself…..). Any medium reel will work with crank-baits, or light and ultralight reels with smaller crankbaits, but you should have one that holds a lot of lines because crank-baits cast a long way.

Also, you may want a reel with a slower retrieve ratio: say 4:1 to slow the lure down a little, and give you more cranking power for reeling in big, mean bass. But if all you have is a Zebco 33 (most of us have, or have had one at some time…..), it will get the job done. In my opinion, the Zebco 33 is one of the greatest fishing reels ever made.

Crank-baits can put bass on your stringer.

With a little practice, you’ll be using them like a pro. Every bass angler should have a few of these in their arsenal.