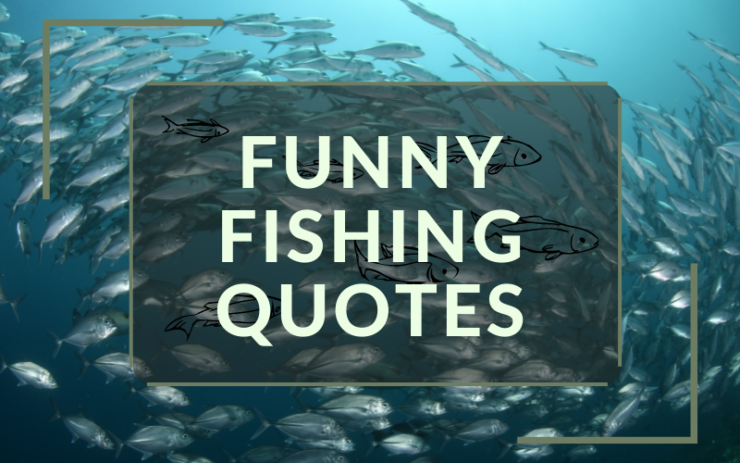 Having a good time is something that all of us like to experience and it can come in a variety of different ways. Launching and feeling joyful with the people closest around you is enough for some of the best times of your life and the most memorable stories. Everyone likes to laugh and jokes and funny quotes are often the easiest and most straightforward way to do it. Having a few jokes to cause some lighthearted laughter is always a good idea.

However, it does not often come naturally to people to be funny or to make others laugh. Some are better at it than others, while people who do certain things just happen to be better at being funny than the rest of us. One such example are fishermen. If you think of an angler in your life and look back on the time you spend with them, you will probably realize that they are the absolute favorites to spend time with. This is well-known and it seems to be widespread.

Fishermen are simply funny and many are wondering why. What makes someone who likes to catch fish an interesting person to speak to and a good source of funny quotes, quips, and quirks?

Well, it is not so easy to find an answer to this question but we will do our best. Also, in the remainder of this article, we bring to you a collection of the best funny fishing quotes that confirm that people who enjoy this activity have a great sense of humor.

Why are Anglers so Funny? 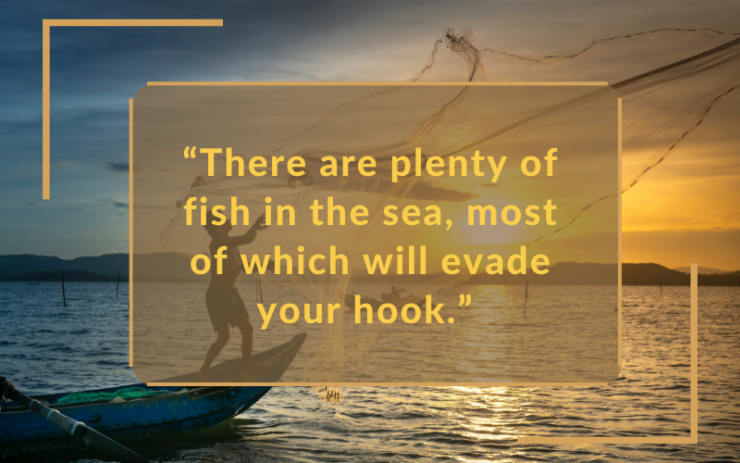 The most common answer to this age-old question is that they have to be in order to have any sort of fun while fishing. First of all, the activity itself can get quite boring, depressing even, especially when out in the open sea. Spending hours or even days away from civilization and trying to catch fish can get miserable, so naturally those who do it came up with ways to have fun.

Having some jokes at the ready and funny quotes to debate with the fellow fishing enthusiasts is often the only entertainment anglers have while fishing. It is a buddy activity, a great chance to hang out and spend time with like minded folk. It is how the best, closest, and longest of bonds are created and how some of the funniest moments are shared.

Fishing is the favorite pastime of many regardless of what they otherwise do in their lives. Over the many years of its existence some memorable and funny quotes have appeared that are now being passed down to new anglers. However, they are also popular outside of the fishing world as they have entered the mainstream dialogue. One does not have to be a fisherman to laugh at such a quote, but they do need to be avid anglers to come up with them. 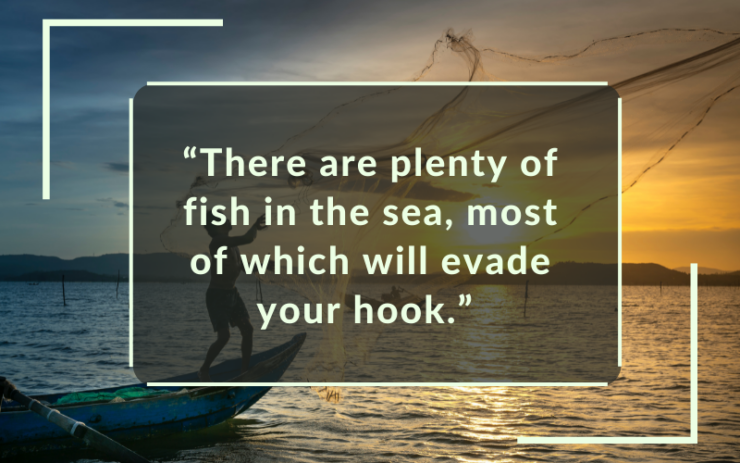 It can be debated for hours why most fishermen are so funny and quippy, but ultimately it does not really matter. Still though, there are some obvious factors that could tell a bigger story about it.

Certain aspects of fishing allow the anglers to think in different ways than when they are otherwise busy, which can be enough for plenty of humorous quotes.

First of all, as it is their favorite activity and who they are deep down, fishermen are finally loose and let their guard down entirely when fishing. This is enough for the wildest, funniest, and weirdest humor to come out especially in a group of several anglers.

Another reason is boredom mixed with waiting. All the time they spend sitting and waiting for the fish to bite gives the mind to wander, to aimlessly think without any direction and with nothing else but whether the catch will happen. Again, in such a scenario, many jokes and seemingly pointless quotes come to life. Also when you are bored you can try fishing from a kayak or canoe because is very fun activity beside traditional fishing.

Fishing is often accompanied by some drinking regardless of the time of day. It is as good of a cause as any for some beers, or even something stronger. Getting tipsy tends to lead to silliness and therefore some of the funniest and most memorable jokes a human mind can think of. The fact that fishing is done in the sun also influences the mind already altered with booze!

Funny Fishing Quotes Everyone Should Know 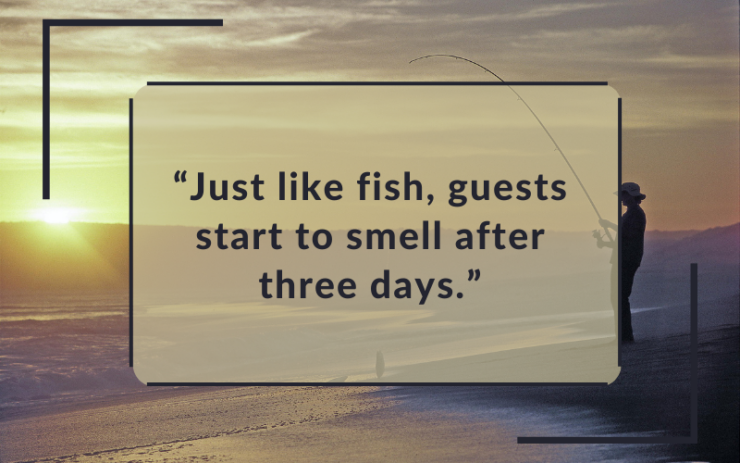 In this section we devote plenty of space to some of the best and funniest quotes about fishing that people have come up with. Some of them you may have heard already, others will be entirely new, and there are also those that make a twist on a well-known quote. Enjoy!

1. “The best fishing spot is the one already occupied by a fellow fisherman!” – Unknown

2. “There is always a bigger fish…to stress about not catching.” – Unknown

3. “There are plenty of fish in the sea, most of which will evade your hook.” – Unknown

4. “Fish come in three sizes, small, medium, and the one that got away!” – Unknown

5. “Lord, give me serenity to accept the size of the fish I catch, courage to lie about it, and wisdom to know none of my buddies would believe me anyway!” – Unknown

7. “Sleeping with the fish might be mafia code for execution, but it may also be the only way I will ever see any judging by how this day is playing out!” – Unknown

9. “Here’s something to think about: if you catch the wrong flu long and hard enough, it will sooner or later become the right fly.” – John Gierach

11. “Come on, we have to get the best fishing spot. You know what they say: the early bird catches the worm!”
“Bird? Aren’t we going duck hunting or fishing?” – Unknown

12. “There is a fine line between fishing and just standing on the shore like an idiot.” – Steven Wright

14. “Give a man a fish and he will eat for a day. Teach him how to fish and you will ruin a perfectly good business opportunity.” – Unknown

15. “Give a man a fish and he will eat for a day. Teach him how to fish and you will get rid of him for at least the entire weekend!” – Unknown 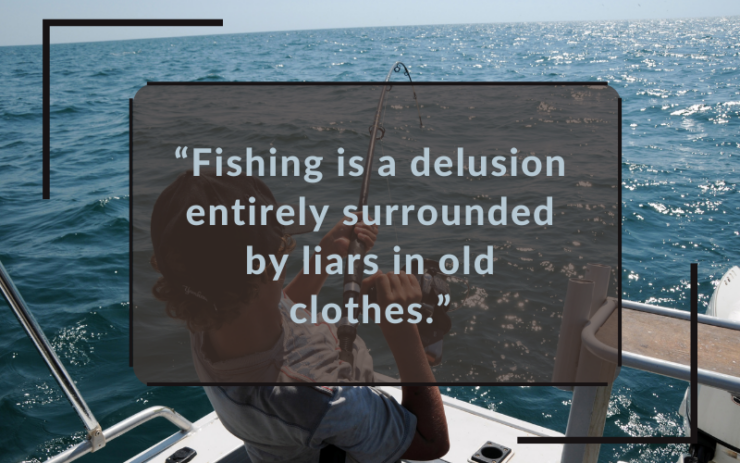 17. “Bragging may not bring happiness, but no man having caught a large fish goes home through an alley.” – Ann Landers

19. “Back in my day, a GPS and a fish finder were one trusty old unit called grandpa!” – Unknown

21. “A fish is a creature that grows the fastest between the time it is caught and the time a fisherman describes it to his buddies.” – Unknown

22. “I do hunt and I do fish, and I don’t apologize to anybody for hunting and fishing.” – General Norm Schwarzkopf

23. “Fishing is a delusion entirely surrounded by liars in old clothes.” – Don Marquis

24. “Somebody behind you, while you are fishing, is as bad as someone looking over your shoulder while you write a letter to your girl.” – Ernest Hemingway

25. “If fishing is a religion, fly fishing is high church.” – Tom Brokaw

26. “There are only two occasions when Americans respect privacy, especially in Presidents. Those are prayer and fishing.” – Herbert Hoover

27. “It’s okay to eat fish because they don’t have any feelings.” – Kurt Cobain

28. “May the holes in your net be no larger than the fish in it.” – Irish Proverb

29. “When talking about the one that got away, you refer to a girl. I think of that one fish. We are not the same.” – Unknown 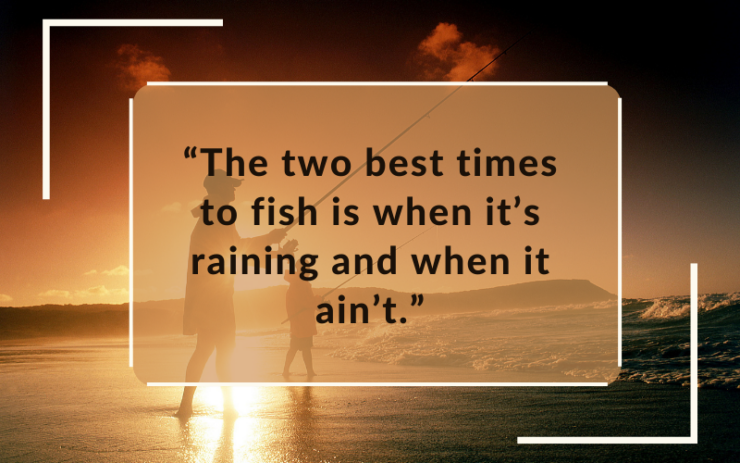 32. “Fishing, with me, has always been an excuse to drink in the daytime.” – Jimmy Cannon

33. “I only make movies to finance my fishing.” – Lee Marvin

35. “When I go fishing, I like to know that there’s nobody within five miles of me.” – Norman Maccaig

38. “Of all the liars among mankind, the fisherman is the most trustworthy.” – William Sherwood Fox

40. “I don’t need much in life. Tight lines, warm breezes, good friends, plenty of bait… it doesn’t get any better.” – Unknown