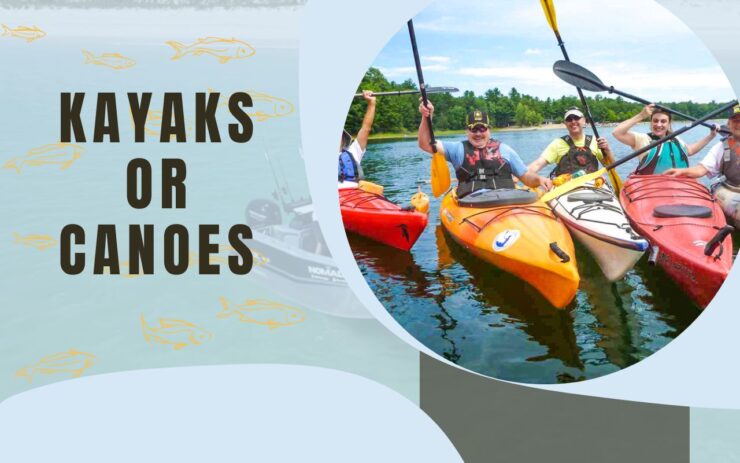 The age of debate between kayaks and canoes has been revived in recent years as more and more people wish to try paddling as a hobby. So which type of vessel do you choose for your new hobby, the kayak or the canoe?

Does it even matter? What are the differences between them anyway and are they so different that you should take the choice seriously? Well, historically, they have been quite different but they are also frequently interchangeable in discussions with a lot of people using them as synonyms.

As a matter of fact, these are two separate small boats propelled by a paddle that have different origins. Historically, they have been used in different parts of the world by peoples and societies whose lives and customs were anything but similar.

In the modern world, they are also their own unique vessels with properties and functions that the other one lacks. Because of this, it is often a challenge for someone who wants to buy their own vessel which type to get. Regardless of whether it is for fishing or recreation, it is a big decision as well as an investment. So which one is better?

Deciding Between the Two 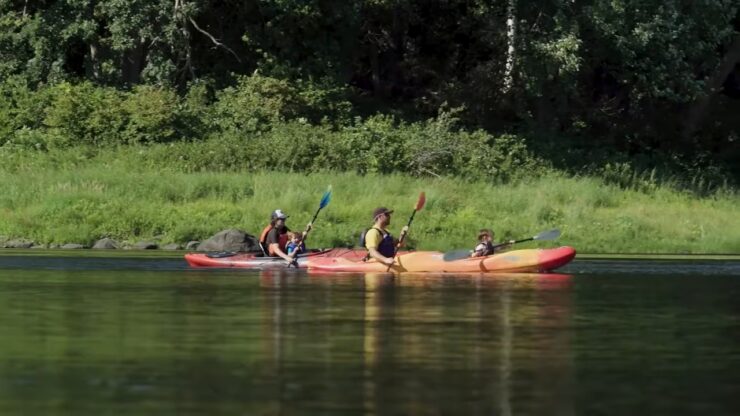 It is not really a debate of which one is better overall because that is not possible to judge. It is much easier and more sensical to talk about their abilities and potential in different situations.

For example, kayaks are usually smaller than canoes which makes them faster. They are also lighter and come with more specific gear and features for dedicated activities like fishing. However, canoes can carry more stuff and have plenty of room to walk on.

Both of them are not equally capable in all surroundings, but neither all different variations of either. One thing does tend to make the distinction easier to figure out and it involves the stability of these two versatile crafts.

Which of them is easier to tip over or flip? Being on the water implies feeling safe and being able to keep your balance so the stability of whatever you are in is crucial. So is the kayak easier to tip, or is it perhaps the canoe? In this article, we talk about this very question and try to determine which of the boats flips more often.

So which of these has better balance and which flips more easily? While it does depend on the individual kayak or canoe model, in general, it is kayaking that tend to be easier to tip over than canoes.

This is because they are less stable as a whole and their hull is harder to balance. Of course, either of the two boats can be flipped upside-down and kayaking and canoeing can both get you wet if you are not careful.

Canoes are stabler than kayaks but it is a lot deeper than that, as well as more complicated. Both vessels come in various shapes, sizes, and styles, and are meant for different uses. These individual designs have different stability levels and are therefore not the same when it comes to tipping.

For example, fishing kayaks maximize stability, especially the sit-on-top models. They favor fishing while standing, which is not something that can be done on other kayaks that are mainly sit-inside varieties.

We do need to dive deeper into the matter if we are to better determine which of these two versatile crafts does better in the water. There are two types of stability that are important when talking about kayaks and canoes. They are primary stability and secondary stability.

The primary stability of a boat represents its ability to remain steady in the water while the conditions are normal. This means no disturbances like strong winds, waves, and debris in the water.

While the paddler is sitting in the boat and paddling in optimal conditions without any specific circumstances, the primary stability is measured. Calm waters and steady passengers are what primary stability deals with.

In these situations, the canoe is the clear winner for multiple reasons. First and foremost, they sit much higher in the water which is a plus. However, it is the fact that most of their hull is under the water that gives them such an edge here.

Primary stability is where they shine because kayaks are narrower and they rock more, with a curve hull where the stern and the bow are higher. While more speedy and with easier maneuvers, they do not have enough primary stability.

However, kayaks make up for it with secondary stability, which refers to how well a boat can behave when the going gets tough. Secondary stability deals with how the boat behaves when it is already beginning to tip over, like when you lean to the side too quickly or too much.

The same goes with faster water, like whitewater stretches, or with stronger winds. These conditions are where kayaks are much better than canoes and therefore stabler.

As it turns out, both the canoe and kayak majority actually have flat bottoms that favor primary stability. However, there are more kayaks out there that handle secondary stability well than there are canoes that do the same.

Kayaks that Flip the Easiest 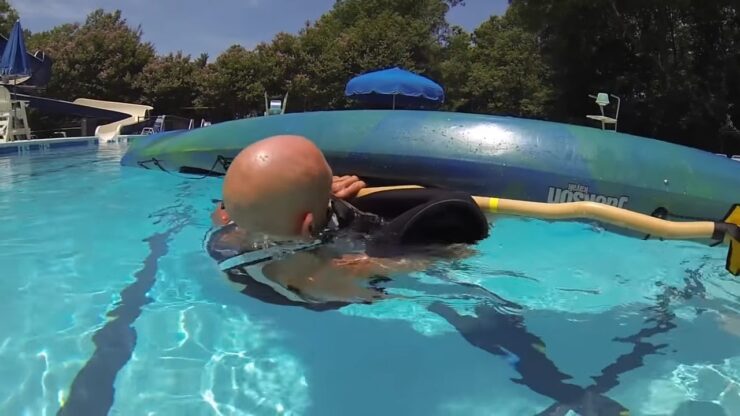 As we mentioned above, there are multiple types of kayaks on the market, and not all of them tip over equally easily or often. Some flip far more easily than the rest, but which one? The most stable kayaks are those meant for fishing, whether they are hybrids or simply sit-on-top.

They are meant to be used in harsher conditions and for long stretches of time. These can also carry a lot of weight because anglers need equipment, and allow the paddler to stand up. All of this requires increased stability, which they of course have. Sit-inside fishing kayaks are also quite stable. Racing kayaks are entirely on the opposite side as they favor stable water and speed, with straight paddling.

Those that are far less stable and flip more easily include sea and touring kayaks, especially if they are advertised as such. They are bigger and rarely capsize entirely, but they have a tendency to be less stable and therefore tip more often than others.

Handling them with care does prevent unwanted upside-down scenarios. Weirdly, kayaks that are meant for whitewater adrenaline paddling are generally the least stable because they sacrifice everything in favor of maneuverability. They are short, meant for experienced paddlers, and less powerful against waves.

Canoes that Flip the Easiest 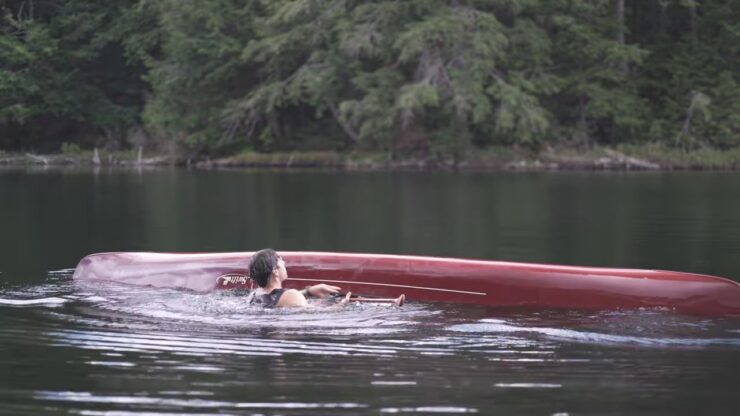 On the canoe side, things are a bit less diverse. Three main types of canoes exist, mainly racing, whitewater, and recreational. Recreational varieties are the most common. The main thing that prevents flipping and offers stability in canoes is how wide they are.

Recreational, the most commonly used type, is the widest and therefore the most stable of the three. It is aimed at beginners and casuals who do not need a lot other than a relaxing paddle session and some outdoor fun. On the other side are whitewater and racing varieties, shorter and narrower and therefore speedy and maneuverable. This however also means they are much less stable.

So what would be the summation of this great debate? In general, kayaks flip more easily than canoes, but both of them can tip over in the wrong conditions or if the paddler is handling them poorly. It is usually up to the one in the cockpit and how they are handling the water and the weather. Of course, the type and the version of the vessel have a lot to do with it, but so do common sense and skill.

Whatever you are paddling in, there is a possibility to fall overboard and/or capsize. Tipping the vessel is not very common but is always a possibility. Wearing a life jacket and a helmet is always advised to make things easier and safer.

Practicing how to recover after tipping is the best course of action when you are first starting to canoe or kayak. Intentionally tipping it over in the shallows and practicing how to protect yourself, the vessel, and your stuff is how you will better handle yourself if it ever happens for real.

When it comes to purchasing your first vessel, think about what you will be using it for, how often, and where. If you are a complete beginner, a recreational canoe may be the best option because it is the most stable as a whole and it is meant for calmer conditions and scenarios.

That is where most paddlers start, after which they can move to less stable options that will indeed tip if not handled with care and skillful paddling strokes.